Communication in multifarious modes plays a very important role in the mutual interaction of various strata in the human society and certain altogether different kinds of communication such as development of science in both theoretical front and the technological front function as a powerful means of communication for an overall interaction with a huge mass of people for a considerable span of time to set a pattern of direction on the mobility of mankind.

Communication as a whole, be it any one form of communication, must be considered as the most fundamental aspect of existence that includes the existence of the mankind.

Considering the multifarious modes of communication along with all the diversities over a great history of the human civilization, that greatly paved way for synthesis and progress of knowledge, any specific mode of communication could be understood as the discerning capability that is the basic property of the mankind when the role of ‘individuality’ diminishes far beyond significance.

That is any specific mode of communication, even though being the expressions of individuals, but could be understood to its fullest sense only from the generalized plane of reality, and could never be focused upon specific or individual expressions.

Such a barrier in other words obstruction could be crossed through the medium of art to communicate ‘truth’ towards achieving harmony and emphasizing this particular theme becomes the core concept of this specific artwork.

Any such expression that is nothing but a synthesis of the past would always play a role to lead the basis of the synthesis towards future.

The mode of expression through art too can not escape this inevitability when an abstraction is carried out to be expressed into a figurative form.

Any figurative form that conveys a specific notion, when accentuating towards the reality, gets wedged in the finite tendency of the figurative mode of expression.

The initiation to cross this specific barrier had widely been experimented in the field of art, when such attempts or different modes of abstractions stand as witnesses of the time of which the artwork belonged.

The specific concept of this work and a series along with this work is an attempt to express such a mode of abstraction that would represent the society, culture and the general psychology over a limited time span in the course of development. 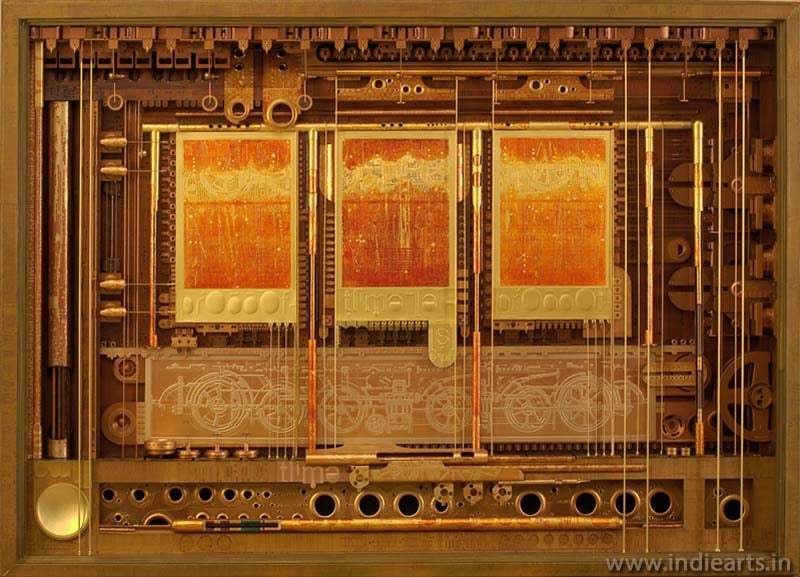