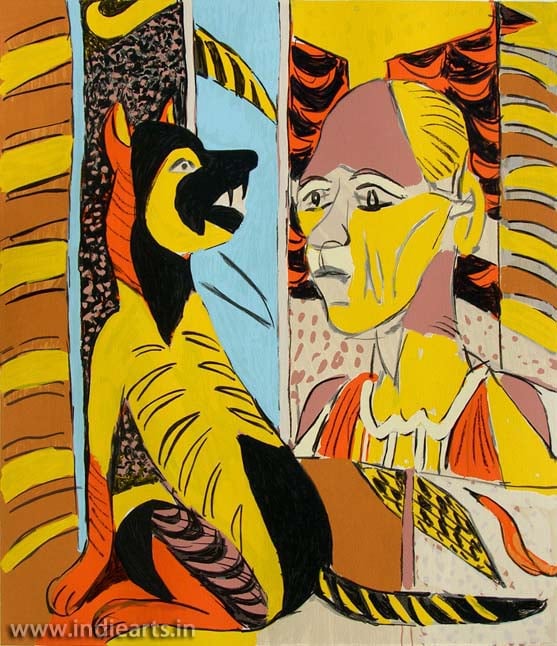 K.G.Subramanyan was born on 15 February, 1924, in Kerala. He studied under the tutelage of Benode Behari Mukherjee, Nandalal Bose and Ramkinkar Baij at Santiniketan. He graduated from Kala Bhavan, Visva Bharati University, there in 1948, after receiving his Bachelor’s Degree in Economics from the Presidency College in Chennai. In 1955, he received a British Council Research Fellowship to the Slade School of Art at the University of London. Since his graduation, K G Subramanyan’s work has been exhibited in several solo shows, the most recent including those presented by Seagull Foundation for the Arts in collaboration with Nandan Gallery at Kala Bhavana, Kolkata, in 2009; ‘The Painted Platters’ at the Guild Art Gallery, Mumbai, in 2007; and ‘The Magic of Making’ at the Seagull Arts and Media Resource Centre, Kolkata, and Rabindra Bhavan, Lalit Kala Akademi, New Delhi, also in 2007. A prolific writer, scholar, teacher and art historian, K G Subramanyan uses his in-depth knowledge of various artistic traditions to create fantastical images of wit and eroticism that are universal in their appeal, yet coupled with iconic symbols drawn from Indian legends and folklore. Being a Gandhian, he served a six-months imprisonment in Allipuram Camp prison, Bellary for being a part ofa demonstration outside his college, preceding Quit India movement. This led him being banned from resuming his education in Madras for three years. Mystically, it was during this time that his artwork caught attention of one of the pioneers of Modern Indian Art, Nandalal Bose in Shantiniketan who invited young K G Subramanyan to appear for an interview.Soon, hestarted studying various art techniques in Kala Bhavanunder the tutelage of legendary artists RamkinkerBaij, Nandalal Bose and Benode Bihari Mukherjee. He was exposed to water colours and calligraphy here. famous indian artist K G Subramanyan artworks in Hyderabad

Limited Edition Serigraph printed in 41 colours on paper. This serigraph was published in an edition size of 60. This item will be shipped unframed, in a roll. The paper size is 36 x 30 inch, Image size is 29 x 25 inch. The print is signed by the artist and comes with a certificate of authenticity. 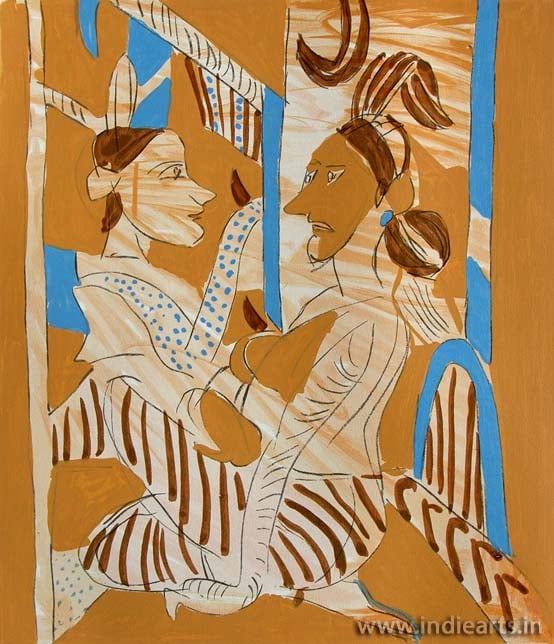