Laxma Goud –An urban artist with a rural canvas 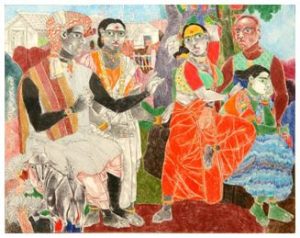 Every child is an artist, the problem is how to remain an artist once we grow up – Pablo Picasso

For Laxma Goud, staying an artist wasn’t too hard as he always carried his childhood and its imagery in his heart. Ask the master artist what inspires his artwork and he will take you down his memory lane when he was a child in a rustic setup and narrate the vivid evocations of his village in Telangana and its residents. Although, he is in his 70s, his enthusiasm for art is as fascinating as that of a 7-year-old.An impulsive artist who can work with many mediums and materials has a style that is unpredictableand eccentric. His art has abucolic flavour blended with organic hues and rustic expressions.

Born in Nizampur in 1940s, young Laxma Goud spent most of his time imbibing the rural spirit, be it watching folklores about Indian mythology enacted by ordinary villagers suddenly transforming into larger than life characters or rearing of animals his father owned or walking through green meadows bare foot or discerning the relaxed country dwellers chatting under the tree. Having noticed young Laxma Goud’s keen sense of observation and immense curiosity to learn art, his father encouraged him to pursue what he adored, instead of pushing him to excel in his formal studies.  After his schooling in Nizampur, his father accompanied him to Government college of fine arts and architecture, Hyderabad to study diploma in drawing and painting, where he made his parents proud by topping the class. He eventually went ahead to study Printmaking in prestigious M S University, Baroda, it was here that he learnt the art of playing with myriad mediums and styles. His mentor K G Subramanyan inspired him to make indigenous work by flipping through his environmentand encouraged him to work with different mediums. He learnt to use oils, acrylic, water colours, pen, colour pencils, etching,gouache, glass painting or terracotta, bronze, clay for making sculptures, all so effortlessly. After concluding his studies, he surprised everybody by going back to his homeland, he stayed close to his village and drew inspiration from the never-ending stimulus that encapsulated him. However, to make the ends meet he worked as a graphic designer in Doordarshan Kendra, until his art got recognized. He later got invited for setting up a post-graduate Fine arts college, which is now called Sarojini Naidu school of Performing Arts, Fine Arts & Communication, where he retired as a Dean.

Laxma’s art has an inimitable sense of passion attached to his village, every inch of his canvas exudes rich heritage, penchants, flaws and fondness of his people and place. He is known for his libidinal and surreal work of art, often reflecting the casual and organic mindsets of rural air. However, his lascivious images took some time for acceptance by the urban art-lovers says the artist.According to the artist beauty is not in the physicality, but in the inner sanctum of a person which is why many of his artworkshighlight sunburnt women working tirelessly to make a living. Most of his images reflectstrong women as his subject playing a role of a workhand, lover, goddess, mother or even nature often seen with a partner or vegetation or with domestic animals emphasising the earthiness of this rustic milieu.His early artworks were monochromic in nature drawn using pen or by etching, however with time his art evolved into colourful expressions. His art is poetic which can flow in anyway or in any direction like a breath of fresh air. Being an amazing sculptor, he has created many creative pieces of art, bejewelled women or tribal men are often seen coming to life through his craftmanship. However, his biggest sculpture by far is ‘Torana’ or a welcome archmade using ceramic clay which adores a studio in Jaipur, here he used several textures, colours and gestures to bring out the domestic warmthof Indian culture.

Being an artist of international acclaim whose career spans five decades and counting, he has travelled the length and breadth of the globe to exhibit his work. He has a permanent gallery in Peabody Museum in Boston, USA. During his expedition he had an opportunity to behold the art and crafts of several nations and was awestruck by the immense resemblance of craftmanship between various countries including his own land India, which lulled him to believe that art has no boundary or distinct language.This rejuvenated the artist in him to create more works like ever.He believes that an artist must continue to be an artist and toil towards producing original workswhether it sells for big bucks or not.He isbeingbestowed with plethora of awards both at home and abroad along with the prestigious Padma shri awardfor his contribution towards art.“For any artist, awards don’t mean anything. People work hard to achieve something in their respective fields, but in the end, what remains is the love of the people who admire my work” says the humble artist. It would be right to say that Laxma is an artist of the world and his life is indeed a message to all,that an unfailing desire to excel with a never-ending passion to work can take one afar.