Akbar Padamsee and his mesmerising oeuvre 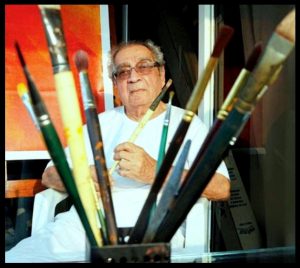 Akbar Padamsee was not just an artist but a dreamer and an alchemist who experimented with shapes, sizes, forms, volume and colours with mere brushstroke, digital art or photography. Yet, he was deeply mindful of every creation and the process it takes to create a masterpiece. He was one of the first modern contemporary artists who provided thrust to the modernist art movement in India.

Being born in an affluent Muslim family of Mumbai in 1928, his father encouraged him and his brothers to pursue English medium education. He was born with a flair for art and was natural at picking up art early on. As a child he used to copy images from his father’s magazines and later got encouraged by his art mentor at St. Xavier’s high school to pursue his muse. The decision to study art at Sir J. J School of Art was obvious, which is where he was introduced to Bombay’s progressive artists group that encouraged Indian avant-garde. He kept creating art from his mind and soon destiny made him cross the ocean to reach France by accompanying the renowned artist S. H Raza, who was offered a French scholarship. Padamsee soon found his new mentor in Paris, a then renowned Printmaker Stanley Hayter hired him in his legendary studio Atelier 17. Within a year in 1952 he held his first ever exhibition in Paris, and since then there was no looking back. He was awarded several scholarships such as Lalit Kala Akademi Fellowship 1962 and J D Rockefeller foundation fellowship 1965. He was also invited as artist-in-residence by University of Wisconsin-Stout. In 1967 he returned to India for good.

He has worked with several medium like water colour, oil, plastic emulsion and had also mastered sculpting, photography, film making, lithography and printmaking. But his hunger for challenge did not stop him from striving, which is evident from his computer art creation. He explored geometric forms through mathematical equations to create digital canvases, which were an instant hit in art fraternity. Many of his works draw inspiration from Sanskrit texts of Abhijanashakuntalam which could be seen resonating in his metaphysical landscapes. His art reflects many genres including human forms and landscapes through his series on Metascapes, Grey works, Heads, Nudes, Mirror Images, Gandhi etc. Colours expand, contract, develop and travel on his canvases as though his brush knows to play and create a prismatic mirage.

He held several solo and group exhibitions across the globe including Venice, 1953 and 1955; Sao Paulo and Tokyo in 1959; Museum of Modern Art, Oxford 1981; Royal Academy of Arts, London 1982 and National des Arts Plastiques, Paris, 1985. He is considered among the top five highest selling artists of India. One of his Greek landscapes was auctioned for whopping Rs. 19 crores.

Despite his achievements and recognition, he never got complacent with his work and kept learning and creating. With a career spanning 60 years, he was bestowed with prestigious Padma Bhushan award, Lalit Kala Akademi Gold medal, Kalidas Samman among others. He had also made two short abstract movies called Syzygy and Events in a Cloud Chamber. His black and white photography were clicked by creating dimensions using light. He believed art must be created for self, but must be in par with changing times and technology.  Despite the age, his enthusiasm towards art was nothing less than a young artist until he breathed his last on 6th January 2020. Yet, his energy and enthusiasm is still alive breathing in his works and his studio ‘Prabhavathi’.