The Twisted Canvas of Jagadish Chintala

When art starts enunciating about our society, people and their demeanour as a three-dimensional life size effigy, bathed in psychedelic hues, then be sure that you are perceiving the contemporary works of Jagadish Chintala. Every single Chintala’s creation carries an expression of ordinary life packed in extra-ordinary creativity.His most famous tubular art whether projecting the rapport of the roommates, the bonding of traditional Indian neighbours, the commitment of the businessmen, the passion between the couple on a vacation or a chilled-out saadhu in shades; reflects everyday life seeping with incredible ingenuity in scintillating colours with a jaw-dropping awe. If there is one word that could describe the artist’s creation, it probably would be ‘carnival’ as each sculpture radiates a multitude of happy hues and fills a sombre heart with joy. As the eminent Spanish artist Pablo Picasso puts it ‘the purpose of art is washing the dust of daily life off our souls’, which artist Jagdish Chintala’s work does effortlessly. 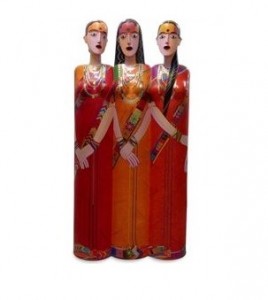 If you ever find the artist’s famous maskon the walls of an art lover outside India, do not be surprised, as Chintala’s work is world renowned and has countlesspatrons, sometimes even before it isfinished. He is one of those rare artists who has put India on the map of ‘one of the best destinations for contemporary art’with sheer magnitude of his artistic flair. Born in a middleclass family in Hyderabad in 1956, he lived a life of a regular suburban boy with giant dreams. Nevertheless, his unswerving fascination for art at an early age,made it a naturally chosen path. He took up a Diploma in Painting from the College of Fine Arts and Architecture, Hyderabad, where his confidence pumped up when he topped his class. This transformed him into a ‘go-getter’ who later decided to study art in the prestigious Faculty of Fine Arts, M.S University, Baroda. Although, initially he had to fight with the Dean and the veteran artist, K. G.Subramanyan to win a seat in post-Graduate Diploma in Mural Design course,he recalls how the man ignited the creative spark in him when he was about to quit later.

Chintala’s inspiration for his popular papier-machesculptures originated from his work in Doordarshan in his early days of career. Back then he created multiple low-cost animal puppets for a Children’s show to be used by the kids. These puppets were not only lightweight, but also vivacious in its appearance, which led to its massive success. He then started perfecting his art work using papier mache as medium, while hiscontemporaries were using a metal medium.In his opinion, papier mache is a medium with endless possibilities, but a tricky one to work with. His initial works of art echoed the vibrancy of his roots, Telangana and its culture, but as he started traveling the length and breadth of the globe, his work started reflecting the cross-cultural attire, expressions, sophistication and much more. As his art evolved, so did his medium and he switched to aluminium, where editions are easier comparedto papier mache according to the artist.

It is not everyday when you see an artist raise to fame in a short span of time through pure talent. His sold-out show in Garhi Studio, Delhi brought him a huge recognition along with an opportunity to study in UK through a British Envoy in Mumbai. Soon, he was offered a three-months British Council and Charles Wallace India Trust Travel Grant for study and research in the UK with Henry Moore, a renowned English artist. During his stay in UK he interacted with many international artists and observed different facets of the society which is often resonated in his artwork. He is based in Hyderabad, India, but travels every four months to Michigan, USA to work in his studio for his overseas patrons. He works almost twelve hours a day and passionately callsboth his studios his lab.As an artisthe has transcended the mundane art form on flat canvas and createdquirkythree-dimensionalpaper collages, masks and tubular sculptures, each with its own unorthodox identity and a sublime narrative.

While most of his artworks is held in private collections by collectors across the world, some of his work can be relishedby thepublic in Madras Museum, Bharat Bhavan, Bhopal and the National Gallery of Modern Art, New Delhi. In a career that spans more than three decades, he has been bestowed with many accolades including the Pollock – Krasener Foundation Award. His piece of advice to emerging artists is to create original, unique and distinctive works of art. His life is a living example for those who doubt the powers of imagination. He has not only created a new dimension in the world of art through his inventive pieces of work, but has also softly nudged the dreamers through his panache that thinking out of the box and executing the idea well can createremarkablebreakthroughs.