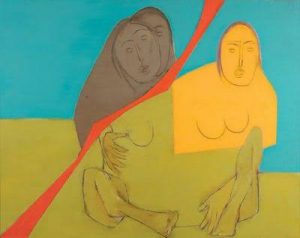 If art had a voice, then perhaps Tyeb Mehta’s art would be looked up as boisterous, not just for its vibrant colours, but for the macabre images often appearing from his consternated memories over a canvas. Being one of the India’s distinguished painters, sculptors and film makers his works have sold for jaw-dropping price tags making him one of the priciest artists of India.

Born in Kapadvanj, Gujarat in 1925, he had one of the humblest upbringings. He later moved to Mumbai and continued his education. Being born in colonial times and witnessing ordeals of partition, he encountered death and agony at an impressionable age. Unsurprisingly, his artworks often resonate the feelings and pains of human heart, be it his own or others who were the victim of those times. Being passionate about art, he studied fine arts in Sir J. J School of Art, Mumbai and became a part of Bombay Progressive Artists Group seeking influence from European masters. His abstract and expressionistic works with cubist forms were more often inspired by Francis Bacon’s work. Yet, he kept his Indianness in his later works captured from Hindu mythology akin to his contemporaries.

He lived in London for a few years working and imbibing inspiration from European artforms. He was awarded Rockefeller Scholarship which allowed him to visit US in 1968. His works reflect the blend of Indian and western modernism with the zing of central figures standing out to make a statement. His pictorial language on canvas bubbling with western panache took a leap into Indian revelation in 70s and 80s. In mid 1980s Tyeb was an artist-in-residence at Vishwa Bharati University, Shantiniketan, where his works were influenced by Bengali culture and vigor. His Shantiniketan triptych series – Rickshaw puller, Charakpuja by santhal tribe, trussed bull, reverberated the dual realization of ‘we are things yet nothing’. His diagonal distribution of canvas that created a sense of movement between characters was discovered accidently in 1969. His choice of plane colours and diagonal division of the canvas soon became his signature style making his diagonal series his true bravura.

His works featuring Indian woman protagonist like Kali, Durga & Mahishasura were an instant hit. These imageries were infused with strength and hope that levitates against the demon within us. His works like Durga that were painted in the times of communal and religious riots send across of message of ‘unity is strength’ through the choice of tricolours symbolizing hope and secularism. Some of these signature works sold for millions of dollars soaring the value of his other works. Despite all the ovation and fame his works received, the artist chose to be reclusive. His love for painting was so fanatical that his moments of bliss was his time spent with his works, says the artist.

His experimental film ‘Koodal’ received Filmfare Critics Award in 1970. His works have been showcased across the length and breadth of earth. He is a recipient of prestigious Kalidas Samman and Padma Bhushan among others. He breathed his last on July 2009. Yet his legacy and inspiration to the world is inimitable.