Raza and his centre of life Bindu 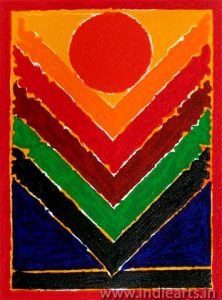 Syed Haider Raza, a name that found its fame across the continents for his pure pageantry of stupendous artworks. He is perhaps one of those very uncommon early artists who ignited India’s fame on an international platform through his sheer flair for brushstroke, yet his art knows no boundaries. His work scales from European expressionism to geometric abstraction with an eventual focus on Indian element ‘Bindu’ or dot, the source of energy.
As a young lad, Raza was entranced by the magnificence of forest in his birthplace Babaria, Madhya Pradesh where his father was a forest ranger. Although he took to art as a child, he held the images of these picturesque flora and fauna in his mind to capture it later in his canvases; something that is evident in his early canvases as a professional artist.  After his high school at Damoh, Madhya Pradesh, he moved to Nagpur to pursue his education in Nagpur School of Art followed by a masters in Sir J J School of Art, Bombay. It is here that he pioneered the Bombay Progressive artists group along with other members including M.F Hussain, F. N Souza etc. in 1947. The group was influenced by western modernism yet bringing out ‘Antar Gyan’ or inner vision of Indian art to the world. He soon moved to France through a French Government Scholarship to study at École Nationale supérieure des Beaux-Arts in Paris. His exposure to European art inspired him to experiment with French expressionism and eventually abstraction. He later became a visiting lecturer in University of Berkeley, California and he found inspiration in American landscapes.

Although, Raza made France his home and married a French artist Janine Mongillat, his heart was locked in his home country. He wanted to feel the waves of river Narmada, smell the petrichor of his village, listen to the chirps of sparrows in his portico. By 1970s the successful artist started questioning his inner drive and often went on a pilgrimage to India. His travels to Banaras, Gujarat, Rajasthan and many more cleared the clouds in his mind and made him find a new dimension to his purpose. His canvases spoke louder than ever with vibrant colours and shapes, ‘Bindu’ became his centre of subject and remained so until his last painting. He recalls how ‘Bindu’ was meant to happen in his art, as back in his school days he was often asked to concentrate on a dot or ‘Bindu’ to improve his attention in class by his teacher. He even started highlighting concepts of space and time, energies of female and male called ‘Prakriti – Purusha’ and various spiritual concepts in his paintings. His art took a significant leap to geometric abstraction which was well received by his onlookers. In 2010 he decided to return to India, never to go back again after his beloved wife’s sad demise.

Being one of the most eminent artists of India with a huge international recognition, he presented his work across the globe including solo exhibitions in New York, Royal Academy of Arts at London, Biennales of Venice, Lalit Kala akademi, India and many more. He was bestowed with countless awards including India’s prestigious Padma Shri, Padma Bhushan and Padma Vibhushan and the respectable French Legion of Honour. His art often sold for big bucks, so much so that one of his art sold for more than 18 crores at Christie’s auction. Yet he never cared for the price tags, but for the art and the artists. He created Raza foundation to help budding artists grow through fellowships and awards every year. For Raza art kept gushing through his veins, even in his 90s he never stopped painting. He painted to live and lived to paint because that’s what his passion and his faith was in. On July 23rd 2016, Raza breathed his last and was buried next to his father’s grave in Mandala. He left a legacy that would keep inspiring youth to work hard and keep dreaming. His narrative of rustic village boy making India famous at international scale and yet helping Indians like him have a big vision through his foundation is something that would last for ages. He was a life long student, he believed in learning and implementing it without succumbing to situations be it age, loss or location. The magnitude of his achievements could have easily made him retire early, yet he painted and he painted till he breathed his last. Raza’s life is a strong message to youth that ‘the only wall between you and your dreams are you alone’.