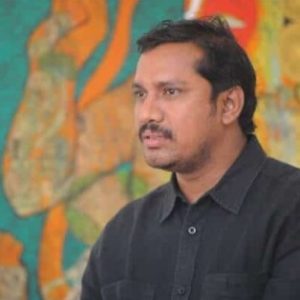 When Tirupati Balaji temple reverberated with divine incantation and pristine smells, young Ramesh Gorjala was immersed in heavenly hymns and meticulous carvings of Gods and Goddesses, while waiting for his chance to get a glimpse of the deity. Little did he know that this stimulus would inspire him to be an acclaimed artist one day. Being born in the family of weavers in Sri Kalahasthi, his encounter with Kalamkari art form in his early life got him to tap into his artistic potential. He learnt the art of Kalamkari from his famous uncle Balaji Teertham, a PhD in physics and National awardee in Kalamkari.

To further satiate his interest in painting, Ramesh Gorjala obtained bachelor’s degree in painting from Jawaharlal Nehru Architecture and Fine Arts University, Hyderabad. Gorjala’s ability to convey multitude of stories on lone frame without bargaining on the grandeur of the protagonist is laudable. There is always one protagonist in his canvas outlining many stories reflected in smaller pockets further. He could make the same deity narrate different stories from Indian mythology on a same canvas and yet kindle curiosity for more. One could beautifully envisage Dasavataram in a single frame outlined by life size Lord Vishnu or two Pandava brothers Arjuna and Bheema aligned to narrate their stories of valor and might. Be it the flying Hanuman fetching the Sanjeevani for injured Lakshmana or Lord Ganesha mirroring his life’s imagery, they never fail to grab the attention of its onlooker. Although, his art has traditional bravura, the white and black checkered box pattern in the backdrop of his central figure adds a modern spice to his work.

He has presented his work in several solo and group exhibitions across the globe. Some of his solo shows include ‘Mythological Metaphor’ at Chawla Art Gallery, New Delhi, in 2010; ‘Embracing Modernity’ at Mon Art Gallerie, Kolkata, in 2007; and earlier ones in Hyderabad and Bangalore. Group shows including his works have been held in Mumbai, New Delhi, Jaipur, Chennai, Bangalore and London. He is a recipient of Mahatma Gandhi Birth Centenary Memorial Award from the Victoria Technical Institute (V.T.I.), Chennai in 2000, and State Award from the A.P. Crafts Council in 2002.

His paintings are filled with details and precision of celestial figures, so much so that his work is admired across the world with patrons like singer Beyonce or Rajanikanth’s daughter Aishwarya, among many. His unique work of art has impressed PM Modi when he noticed Gorjala’s work on a wedding card and insisted the artist to paint him a Kamadhenu, a “cow of plenty” on a 6’ X 3’ canvas. His 11x64ft artwork adorning the walls of Tirupati airport speak volumes about the Gorjala’s reach. Despite many artists portraying Hindu Gods and Goddesses in their canvases, his motive behind his storytelling canvases is to narrate the lost stories less spoken of. His stories emerge from Ramayana, Mahabharata, Dasavatara and Buddhist scriptures igniting a renewed interest in ancient mythology among its bystanders.

As a student then and an artist now, his enthusiasm to learn and create has not budged an inch. Despite subtle resentment and apprehension at his family, he kept following his muse. He learnt diligently in his college from his professors, attended as many exhibitions and shows of masters as possible and practiced techniques. Once he created a style of his own and got recognized, there was no looking back. He enjoys experimenting with his brush on several divine themes. He even created a series called ‘Eye of Faith’ after seeking inspiration from Opthomologist Dr. Gangadhara Reddy’s intricate photographs of human eye. Today his parents are proud of his accomplishments and are elated to see his patrons love his work. He has few upcoming projects up his sleeves like series on landscape and ‘ Vahanas (vehicles) of God’, among others.

Looking back at how far Gorjala has come through his sheer talent, his gratitude for almighty humbles him, while he looks forward for more exciting and stimulating future. He lives and works in Sri kalahasthi away from hustle and bustle of city life, where he finds tranquility of nature and divine, together whispering ideas in his ears.