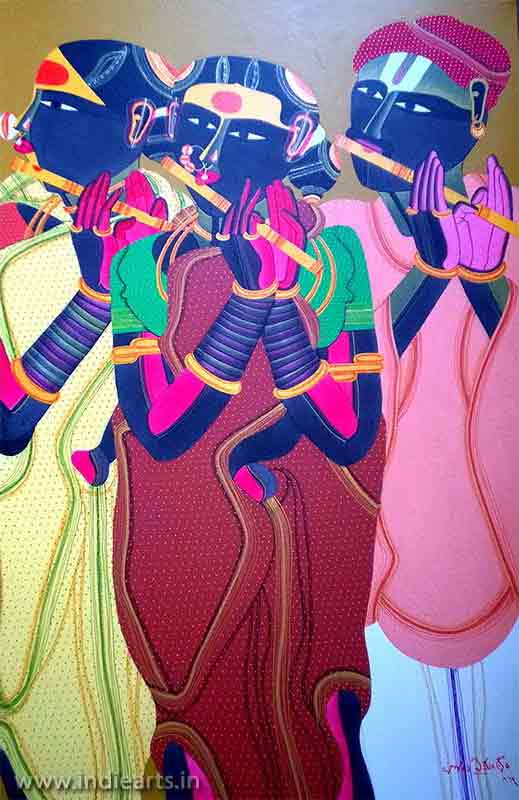 Thota Vaikuntam Paintings bring a calmness of spirit and tranquility to all those who see them. He avoids an obviously disturbing form but instead has repeated the pictorial motifs extensively. At the emotional level his aim appears to be ,to create, a harmony between an imaginative concept and his technical expertise. His paintings deal with the theme of Love, which is always indirect and veiled. He does this successfully by using symbols like the parrot and mirror. The mirror reflects the Nayika’s mood and the parrot her gentleness. Vaikuntam’s parrot appears as an ardent listener to the lover’s woes.

Like the folk painters, the placement of the form, without illusionistic depth, the decorative pattern on the fabric, the endless repetition of typical form show Vaikuntam’s urbane approach and makes it clear that he could remodel and restructure any tradition for working out his style. Undisturbed by environment we concentrate on the psychological tensions generated on purely human terms. These small paintings with large figures occupy the viewers gaze. They seem to be prisoners of their own decorated garments and jewelry that symbolize societal rules. Using powerful images of women, Thota Vaikuntam explains and illumines the rich meaning of feminine beauty.

Thota Vaikuntam Paintings – Acrylic on canvas with Dimensions 24*36 in