Perceiving the colours of India through Manu Parekh’s eyes 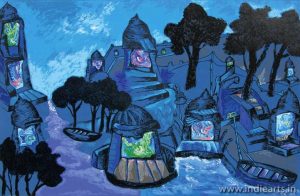 When the night falls, the streets of beguiled Banaras radiating the glow of ganga emanating from moonlight reflection, turns real on a canvas painted by Manu Parekh. While the world shuts down due to pandemic, his brush seldom seeks any repose even after six decades of glorious career. Parekh’s work is incredibly influenced by people and places he has experienced. The sheer depth of culture and colors of Varanasi resonate a thin line between birth and death while celebrating both on his canvas. Whilst, the dark eerie lanes of Kolkata in the backdrop of majestic buildings standing tall from colonial times, echoes huge divide between rich and poor under his brush.

Born in Ahmedabad, Gujarat in 1939, he knew he wanted to be a painter in his 5th grade. Young Parekh was often encouraged by of his art teachers at school. Which is why he believes that a teacher-student relationship is primary in shaping one’s thoughts and aspirations. Parekh soon went to study diploma in drawing and painting from J J School of Arts, Mumbai. Here he got an opportunity to be mentored by artist Mukund Shroff. He even had a short stint in National School of Drama and served as an actor and stage designer in theatre. He soon worked as a designer in Weavers’ Service Centre, Mumbai and later as a design consultant in Handicraft and Handloom export corporation of India before turning into an independent artist.

Since he had to travel for work, he had an opportunity to explore the vibrance of Kolkata, that influenced his art while seeking inspiration from old Indian masters Rabindranath Tagore and Ram Kinker Baij. But when he was forced to move to the more urbanised city of Delhi, he lost his inspiration. However, he got back his muse from Varanasi after his father’s death and since then he kept frequenting his visits to this holy land to get stimulated. He also admits that he is influenced by F N Souza and M F Hussain’s energy and vigor as an artist. His most famous work of art is his ‘Banaras series’, beautifully portraying the natural and artificial lights of the city. His work on ‘Bhagalpur blindings’ uncovers his deep retort to compassion for humankind which was influenced by Picasso’s Guernica. His work on series ‘Heads’ was influenced by his career in theatre, that projects different expressions by the same actor. His work on ‘Portraits of flowers’ projects beauty and aesthetics of nature.

He has presented his works in many solo and group exhibitions ranging from his first solo exhibition of graphics and paintings in Ahmedabad in 1968. He has participated in two Triennales in India in 1975 and 1978 and HelpAge India mobilized fund by auctioning his works at Sotheby’s, Bombay in 1989 and Andasprey (U.K.) in 1991. Parekh has had several group exhibitions and the Modern Painting exhibition at the National Gallery of Modern Art in 1982, Hirschhom Muse exhibition at the Smithsonian Institution, Washington DC the same year and the travelling exhibition, ‘Seven Artists’ are some of the notable ones. Apart from the solo shows at Bose Pacia Modern in New York and at ARKS Gallery in London, ‘Small Drawings’ at Sophia Duchesne Art Gallery, Mumbai in 1991, Ritual Oblations at Rabindra Bhavan, New Delhi in 1999, ‘Portraits of Flower’ and ‘Landscapes of River’ at Jehangir Art Gallery and Tao Art Gallery, Mumbai, in 2003, ‘Banaras’ at Vadehra Art Gallery, New Delhi in 2004 and Banaras – Eternity Watches Time at Jehangir Art Gallery, Mumbai, in 2007 were the notable among his solo exhibitions.

Acknowledging Parekh’s contribution to Indian art, he was awarded Padma Shree from the Government of India in 1992. He is also the recipient of National Award from the Lalit Kala Akademi, New Delhi, in 1982. He has also received President of India’s Silver Plaque and the All India Fine Arts and Crafts Society Award, New Delhi, in 1972. He believes India has so much to offer to the art and artists alike that every artist should stick to their roots, something that he held on to himself throughout his career. As an artist he has always tried to showcase the rich heritage of his motherland through his work. He acknowledges that his job and love for India took him to places that introduced him to umpteen artisans, craftsmen and women who made him feel modest yet proud. He believes India is blessed with so much craft and culture, that there are endless possibilities for an artist to explore and still create a work that is original, organic and world class. The artist works and lives in New Delhi with his artist wife Madhvi Parekh.