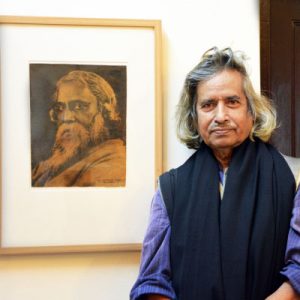 Walking across the sublime lanes of greenery emanating Shantiniketan, Jogen Chowdhury reaches his classroom promptly, ready to guide and perceive his creative and curious students and their works. Jogen has been instrumental in motivating fellow artists to cling to their contemporary art forms in lieu of western art style. His canvases resonate his roots, experience, pain, solitude, feelings, all out loud.  He is considered as a significant modern artist of 21st century to take local flavor of Indian art style to international platform.

Jogen hails from a family where both his parents had a flair for traditional and regional artforms, therefore the inclination towards art by him was conspicuous. To pursue his muse, Jogen joined Government college of Art & Craft and later became an art teacher in a school. He soon joined as a designer in handloom board, Kolkata.  He later moved to Paris to study art at Ecole des Beaux Arts, in William Hayter’s Atelier 17, through French government scholarship, where he came across the popular European art forms and learnt about abstract art. During his learning and working years in Paris he received Prix le France de la Jeune Peinture award. Despite all the external influences, he kept his work original believing “To be global you do not have to do something that is imitative of America, Australia or England. It has to have an authenticity, which is not what blind imitation allows for”. After 3 years he returned to India and started his career as a textile designer in Madras and later moved to Delhi as an art curator in Rashtrapati Bhavan. He eventually took up a position as a professor at Kalabhavan, Shantiniketan.

Being born in Faridpur, Bangladesh in 1939, Jogen Chowdhury encountered many dark and volatile moments during his early life such as displacement from Bangladesh as a refugee to Kolkata due to partition, political turmoil, leftist movement and financial crunches which scarred his thoughts. These influences are seen in his canvases as a disfigured Ganesha representing the greed and unfairness of businessmen who worship the lord only for their benefits. The pain and solitude often resonate in his indistinct characters mulling over past against a shady backdrop even when with a partner.

Although he has used watercolors, oil, pastel, ink, pen in his work, his most famous works are made using unbroken lines created using pen. His work using fluid lines is unique and organic that has fetched him a title “master of unbroken lines”. His works also have variants of texture achieved using cross-hatching technique. Although dark his works have been critically acclaimed and been exhibited and sold worldwide. He has exhibited his works both solo and in group across the globe. He has been bestowed with many awards including Kalidas Sanman, Government of Madhya Pradesh in 2001 and award at the 2nd Biennale of Havana, Cuba in 1986.  Jogen has started an art magazine called ArtEast in 2016 and has established a museum in Kolkata called “Charubasona” dedicated to art featuring his works since childhood.

His life is an epitome of inspiration, despite all odds and obscurity, he never stopped believing in his dreams and followed his calling. It is through his suffering he ignited the art world with message-oriented canvases. As an artist, teacher, poet and art juror he wears many hats. He gives back to society as a teacher who encourages students to understand their style and stay grounded to their roots. He often buys his students artwork as a token of encouragement. He lives and works in Shantiniketan.