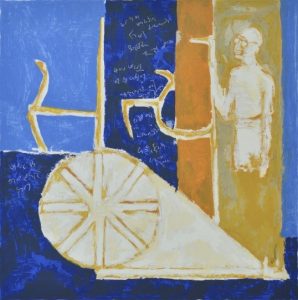 Haku Shah’s canvas provides a cognizance into the Indian tribal heritage. His paintings are aperture between tribal art & craft and the rest of the world. Having spent his boyhood close to tribal belt in a Gujarati village, he developed a deep sense of connection with these indigenous groups of India, that stayed with him forever. However, his work in Gandhi Ashram in his early days of career reflects its influence in his artworks often projecting sanctity and peace in being Swadeshi, reasoning his belief in staying minimalistic. Nevertheless, his pieces of art also often speak volumes about Hindu mythical characters under the backdrop of humble and rustic setup, such as Lord Krishna playing his flute, while cows encircle him. Every piece of his work is an adage to humanity, harmony and belief.

Born in a village called Valod, Surat, India in 1934 his tender mind naturally inclined towards different forms of art including music and poetry. He pursued his bachelors and masters degree in fine arts from the popular M S University, Baroda under the tutelage of legendary artists/teacher K G Subramanian and N S Bendre. He says when he first entered the Baroda school three things inspired him and shaped him into what he is today – village, tribal world and Philosophy of Gandhi. These encounters had inked his passion for folk and tribal art & craft in his mind, that awaited its outburst in the form of paintings and documentaries later. His experience with tribal lifestyle has taught him that they are wealthy in true sense as music and art is etched in their genes. They celebrate life with colours, delicacies, melodies and moves as though inferring that happiness is a state of mind and has nothing to do with money. He worked briefly in National Institute of Design, Ahmedabad, post which he was awarded Nehru fellowship which collectively encouraged him to stay dedicated to tribal art.

Artist Haku Shah has extensively presented his works across the planet, that introduced the simplicity and vibrancy of lesser known pockets of India to the world. He has worked tirelessly towards the improvement of tribal society by bringing their work into the limelight through workshops and exhibitions. He worked with Weaver’s Service Centre that associated directly with weavers across India. He was invited by renowned art historian Dr. Stella Kramrisch to curate seminal exhibition Unknown India that travelled to the USA. He jointly designed and curated an exhibition on clay – Maati Ye Tere Roop in Crafts Museum, Delhi and set up crafts village called Shilpgram in Udaipur. Apart from these, artist Haku Shah has made several solo and group exhibitions too. His latest exhibition on Mahatma Gandhi’s life and narrative called Nitya Gandhi : Living Re-living Gandhi, rekindled the memories of Bapu and sent across the message of peace, equality and unity to young and old alike. He is a curator of Museum for Tribal Cultures at Gujarat Vidyapeeth. Aside from restoring tribal art in India, he has associated with several international museums like the Mingi International Museum of World Folk Art in San Diego, California; Museum of Mankind, London and the Tropical Museum, Amsterdam. He has penned many books for children. He has published extensively on Indian art & crafts and have composed couple of films on the subject. He has taught at School of Architecture, Ahmedabad for many years and served as Regent Professor at the University California, Davis. He is a Chairman and founder trustee of Bhooma Lok Shilpa Sansthan, Gujarat.

Artist Haku Shah is a man-on-mission, with a career spanning more than half a century and a contribution so rich and significant to the world of art. He is been bestowed with several prestigious awards including a Padma Shri by President of India. His inclination towards collecting art and documenting them extensively, alongside encouraging the art and the artisan makes him a sincere artist, anthropologist and an art historian. As a teacher he often instructed his students to avoid unnecessary waste by using extravagant colours, something that Gandhi himself edified the society. He believes that Indian artists in today’s time should stay decked to their roots and pick inspiration from their rich culture and tradition instead of seeing the west. His message to youth is to have unfailing rigour to learn by observing and imbibing. He currently lives and works in Ahmedabad. Shah has dedicated his life in the upliftment of lesser privileged yet talented societies, which makes him a real Gandhian. As the renowned artist Amit Ambalal puts it “There you can see the Gandhi in him, in the concern for the lowest person”, he truly has re-lived Gandhi.