Ganesh Pyne and his art of melancholy 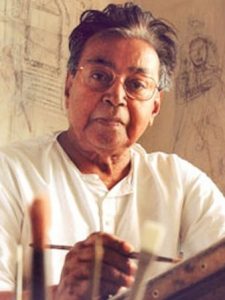 Born in 1937, Pyne joined Government college of Arts and Craft in 1959 after finishing school and was particularly drawn towards the skeletal remains of humans and animals. This eventually became the subject of his canvas with death being the epicentre of his paintings. In 1960s he started his career at Mandar Mullick’s studio by working as a book illustrator and sketching for animated movies. He also joined Society of Contemporary Artists. It was hard to make ends meet those days as he had little money to buy colours. Yet he kept drawing with pen and ink. His first painting was titled ‘Winter morning’ picturing him and his brother going to school together. Although, he was a calm and composed man outside, his art was rebellious, venting his anger and dismay in the form of skull, cadavers, creepy faces in the backdrop of dark and blue shades. He even depicted less noticed mythological characters like Amba, Ekalavya and others whose life was reflective of miseries and curse. His art is a visual tour to the horrors perceived and experienced by him and his characters. Pyne started with watercolour but eventually moved to gouache and later to tempera as his medium.

However, Pyne did not always make shady paintings, some of his early works in watercolours drew inspiration from Abhinandranath, Hals Rembrandt and Paul Klee’s work. Nevertheless, it was his unique work of shady art that brought him fame. He often drew inspiration from traditional Indian puppetry, drama and movies. All his works resonate death either in its hues or figures. Frayed buildings cry out loud its uncanny past, a solitary fisherman is seen trapped in his own fishing net, while a distant trader sees his own shadow as death. Be it flickering lights or beheaded hero or predator approaching a prey; all speak one truth, that death is inevitable. Despite producing successful works in 1970s, he stayed away from the public eye for a while due to the envy & bitterness among his peers and commercialism in art industry. He was a man who often kept himself away from limelight and chose to exhibit his work in limit. As an artist he preferred to paint but not commercialize it. It was only after his marriage that he realized the importance of life & love and broke his bubble to come out and express. In fact, his first solo exhibition was held in his 50s.

As a painter and draughtsman, he exhibited his works in several solo and group shows across nation and the world. His work was received well and was often appreciated for his style. He was bestowed with many awards for his work including the Raja Ravi Varma award from Kerala Government and Life time achievement award by Indian Chamber of Commerce. Ganesh Pyne’s life has been an inspiration to many which is why many books have been published discussing his works and life. A movie by Buddhadeb Dasgupta on Ganesh Pyne’s life ‘A Painter of Eloquent Silence: Ganesh Pyne’ received National award for Best Arts movie in 1998. He was a critically acclaimed artist, who was described as ‘a poet of melancholia’ by art critic Ranjit Hoskote, while the celebrated artist M F Hussain described him as ‘India’s best artist’. Though a man of few words, his brush was verbose with reality of life seeping through it for the world to look at. He breathed his last in 2013, but he left his thoughts on the canvas for the world to see and savour for eternity.