From humble Signboards to Opulent Canvases – Journey of Laxman Aelay 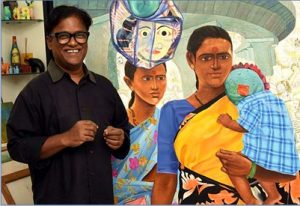 When young Laxman Aelay stepped into the bustling city of Hyderabad, he was clueless about paying for his education, let alone creating his niche. But his sheer passion and perseverance soon made him a renowned artist of his time. He is a proud creator of Telangana logo featuring a combination of Kakatiya thoranam, Charminar and State emblem of India. He has also created Government of Telangana State police logo and many more. His artwork is the reflection of rural Telangana and its people that has engrossed many patrons.

Born in a humble family in Kadirenigudem, Andhra Pradesh, Laxman Aelay’s story is a true ‘rags to riches’ narrative. As an impecunious college boy, he had a strong hankering to continue his education and continue he did, by doing odd jobs like working as casual labour in factory, writing number plates, painting sign boards etc. In order to cater to his college fee, he made sign boards after college hours. He eventually started working for Eenadu newspaper. He worked as an illustrator for books. But the artist in him coerced him to pursue his education in art by going to art school, he left his job and soon pursued a bachelor’s degree in fine arts from JNAFAU, Hyderabad. He had a brief stint in cinemas where his contribution to movie posters like “Rangeela’ and others were well received. But he decided to stay focused with his muse and worked as a freelance artist full time.

His works weather in monochrome or vibrant hues or in distinct dimensions, often limn the class, culture, heritage, strengths, social and political issues related to Telangana and its women. His village Kadirenigudem is often the subject of his canvas or an inspiration to create. He did his first solo show at Indian Council of Cultural Relations Art Gallery in Hyderabad in 1999. While, he exhibited his works at several national and international shows, he became a much sought after artist of his time. He has received several awards and medals including award from Hyderabad Art Society in 1999.

He is one of the trustees of “Art @ Telangana”, an online non-profit trust that brings art, art connoisseurs and budding artists together under one roof, through art camps and exhibitions. He believes in encouraging youngsters with flair for art to believe in themselves, just as he does to his artist daughter Priyanka Aelay, with whom he shares his studio. He works and lives in Hyderabad.